A STUDY OF A DIRECT LINE OF DESCENT by: Jan Irving

written and prepared by the author for the
Third World Symposium on Clumber Spaniels, Sweden, May 1993

The article was published in Clumbers Celebrated – the 50th special issue of Clumber Spaniel Correspondence (July 1995, that magazine is now published as Clumbers

With Bailie Friar as my first example, I will take us through a fascinating history of the Clumber Spaniel. By turning to historical records we can learn so much about our breed. No true breeder can afford to ignore the wealth of information contained in descriptions, show critiques, advertisements and of course photographs. Even if a study is limited to colour alone the material can explain and prophetize so much. There are, of course, many gaps but by studying siblings and close cousins, we can narrow these voids. 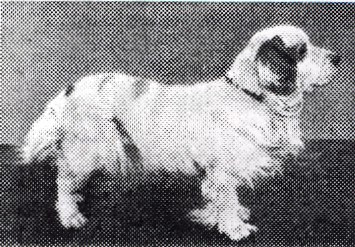 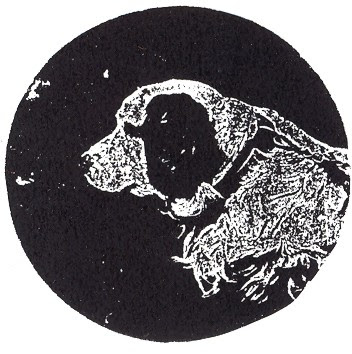 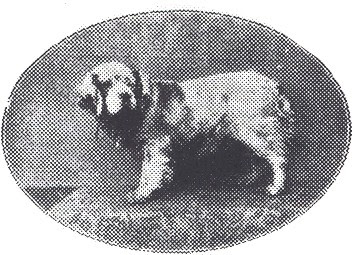 Ch Bailie Friar, who tragically died when only about five years old. He was whelped in August 1894, by the good dog SANDY FRIAR from the excellent producing RECKLESS FRIAR. He had a stunning and very well documented show career – ending only when he was suffocated in a railway trip to a show. He was also a talented field dog. Bailie Friar was variously described as:
has rare (superb) bone and body with a grand head
taken all through is a good sort
and on several occasions when compared with a fellow competitor, MONK OF SALOP, was claimed to be better in body. The surviving illustrations show us a dog a little lacking in the depth of stop and flew – but see how he improves with age. In most pictures he is high in rump, but look again at the illustration from the Kennel Gazette [top right], he is certainly not high in rump nor weak in back. In fact
He has excellent front angulation
and lovely length of upper arm which combine to allow for a good reach of neck.
Built well behind also, he must have been a strong and powerful dog
good forequarters;
strong, broad back;
ribs well sprung and carried well back;
no tuck up of flank nor an overlong loin;
good hindquarters with a low set tail. 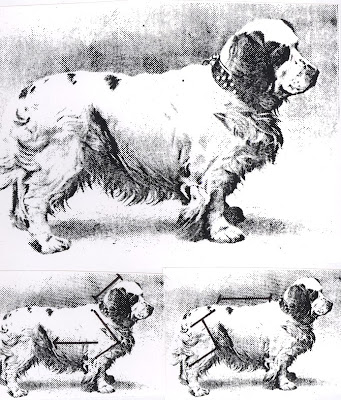 True by today�s requirements long in muzzle and plain in head.
I say �requirements� as all students of Clumber history will be aware that the actual breed description has changed insignificantly in its history.
Bailie Friar had some body markings of a fairly heavy hue.

His son Bailie Junior was out of HEMPSTED FLO. Whelped in 1898, he was originally registered as BEECHGROVE BAILIE. 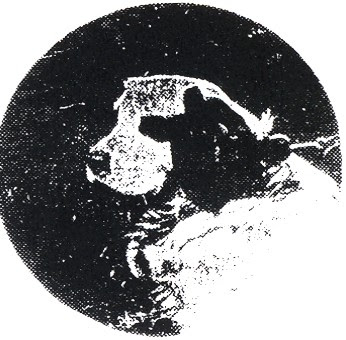 Bailie Junior was also an extremely successful Clumber, and also a highly acclaimed field dog. Owned by the celebrated dog man Harding Cox, Bailie Junior had a weaker head than his sire but similarly marked. Perhaps not the same length of upper arm, he, however, still represents a strong, compact, broad dog with excellent bone. 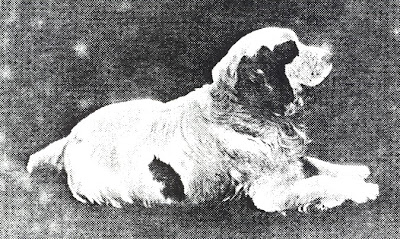 Baillie Junior (Kennel Gazette)
Bailie Junior had less success at stud, siring only 2 significant progeny compared with his father�s 15. Bailie Junior is nonetheless a vital link in defining the lines that yield all of today�s top winners.
Bailie Junior was sire of CRANLEIGH ROSE, out of Cranleigh Fan, ROSE herself was the dam, by BEECHGROVE RODNEY, of ROXLEY FAN a studbook bitch. ROXLEY FAN was the dam of FIELDING QUEENIE another studbook bitch, who was by the well performed dog Ch HEMPSTED TOBY. Her daughter, by Ch Preston Shot 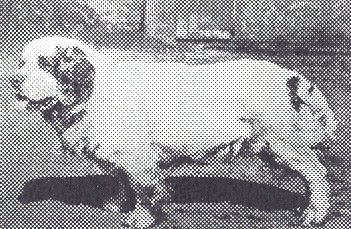 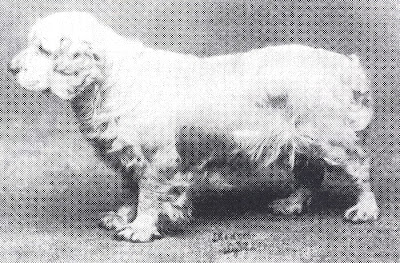 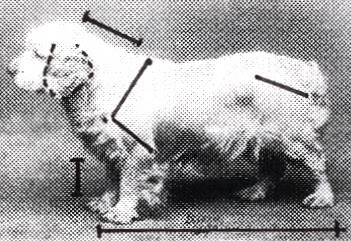 long, without been built like a ferret;
low without dragging her stomach on the ground;
good length of neck;
fair forequarters;
excellent length and lay of pelvis;
good quality bone;
nice large ears;
and a pleasant head and so nicely marked and coloured.
From Bailie Friar to Fielding Beauty we�ve seen an improvement in overall quality – Beauty has better length of body, colour and placement of markings, ear shape, and still retains fair fore- and hindquarter angulation, excellent bone, compared with Bailie Friar. Her sire Ch Preston Shot alone could not have endowed her with this as he was a fairly short bodied dog.
Fielding Beauty was a rare dog, good looking she also produced the main stay of the breed this century in Royalist of Wilts. Royalist was by Ch HEMPSTED SHOTOVER and born in 1912. A creditable showring performance, with challenge certificates to his credit, his career was of course affected by WW1. He sired the animals to found the modern Clumber. Royalist of Wilts was shown again after the war and died after being purchased by Mrs Richard Cape in the mid 1920s. His best progeny include: 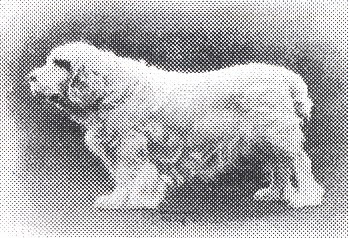 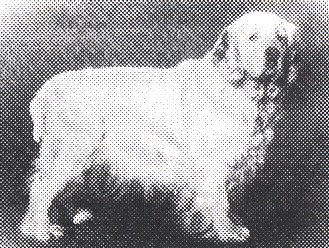 *JENNIE McCAURA (both from Sanderson�s Pedigree Dogs)- both out of Ch HEMPSTED LUCYGIRL but Jennie never bred on. And 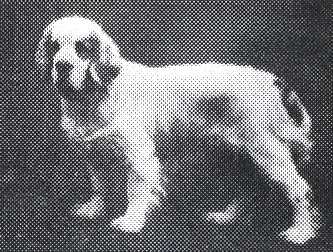 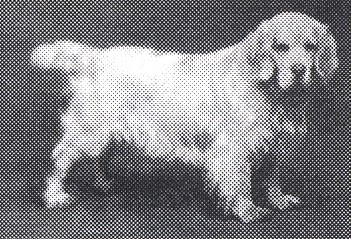 *CARNFORTH TRAVELLER (both from Phillips and Cane but also in Grayson & Furness) who when mated together yielded the important sire CARNFORTH CALL BOY.
For the purposes of studying a direct line of descent we turn our attention to the little known HIGHCROSS BOSS who was by Royalist out of the unregistered BESS. HIGHCROSS BOSS�s only claim to success was his son 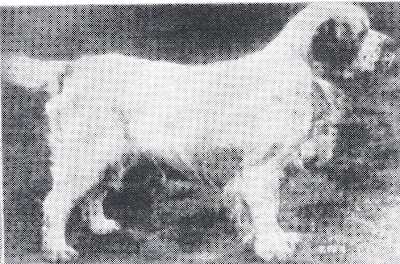 Oakerland Repeat (from Phillips and Cane).
Oakerland Repeat was built more along the lines of Bailie Friar than his granddam Fielding Beauty; he was a little short overall but he had class of presence so often required in the modern showring. An upstanding and smart dog Oakerland Repeat still had length of neck despite a lack of chest development;

he had a nice forequarter angulation;
fair ribcage;
but unfortunately was a bit short in hindquarter where
his pelvis is also steep and tail set fairly high.
His great son, also owned by Miss Margaret Reed, was actually bred by Arthur Smith of Harden. 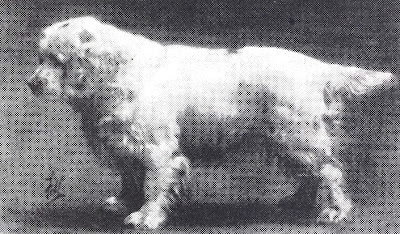 Ch Oakerland Repeater (photo Fall from Phillips and Cane but also in Grayson & Furness) is the first Clumber in this study to actually demonstrate the undesirable short and stuffy neck sadly typical of a number of today�s top winners. Overall he is a short dog and so inclined to hold himself like a Sussex Spaniel with the upper plane of his neck in line with his topline.

Obviously a
broad dog
he also lacked frontal sinus development
but never the less he had good bone;
nice length of second thigh;
and hock to heel;
although he is too straight (perpendicular to the ground) from pelvis to stifle.

I consider his son a vast improvement. Bred by Miss Reed from her studbook bitch OAKERLAND RUTHLESS 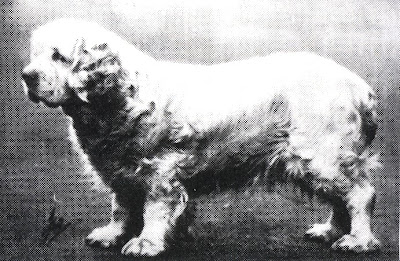 Ch Auckwear Ripper (photo Fall fromPhillips and Cane but also in Grayson and Furness) was originally sold to Dick Shaw. However, Miss Reed was able to eventually repurchase him and when collected from the station he gave her a look of reproach for having sold him in the first place, he travelled home with his head resting on her shoulder and never depart again. Ch Auckwear Ripper 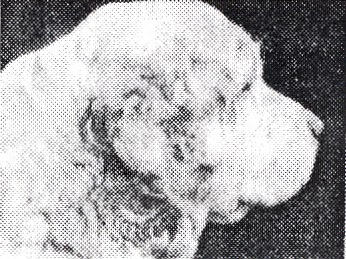 originally registered as OAKERLAND RIPPER, was the same calibre of Clumber as Fielding Beauty, some five generations back! Whelped in 1930, Auckwear Ripper matured into 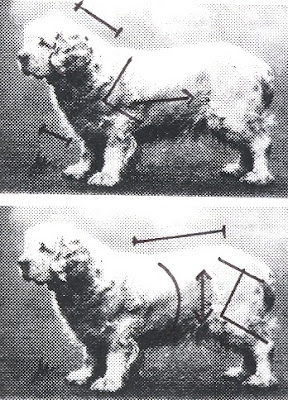 a broad dog; with a
lovely head;
large ears;
strong, long neck;
good forequarters;
with length of back without an exaggerated loin;
good ribcage, spring and depth;
well let down in flank;
nice length of hindquarter with a good lay of pelvis;
nice hindquarter angulation;
and good bone!
A superb dog – Miss Reed also declared he was the best!

He sired the very pretty headed 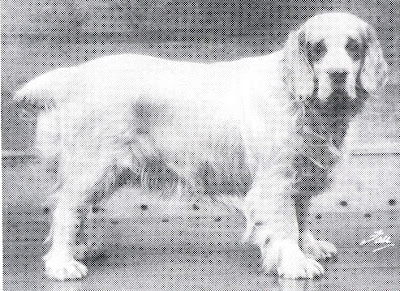 *Maureen Maeve (original photo by Fall but also in Grayson and Furness) who dominated the bitch classes. Clifford Hubbard described her as �one of the best bitches in Britain of her day�. Again more deeply marked, *Maureen Maeve was whelped in 1936, from TEIGNWORTHY DAWN. Alas she, overall, is a disappointing study being much too square in shape.

She has Ch Oakerland Repeater�s short neck, only aggravated by a poor angulation and lack of body width. She I suspect was the first of a sad era when head type were taken as the only criteria for placings. Undisputedly a lovely head, lacking in depth of stop and being long in muzzle by today�s requirements, it is however still a very attractive head, overall 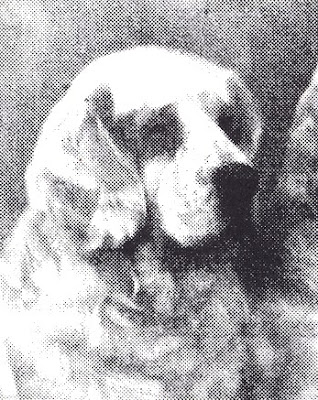 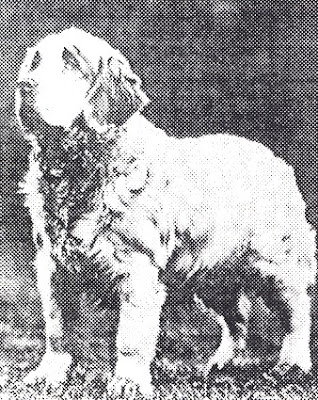 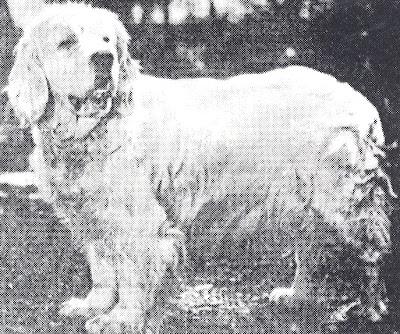 (private collection)
*Dainty of Breda, bred by Mrs V Pond and owned by Brian Ghent, claimed many CCs and dominated bitch classes. Whelped in 1948, she was the classical white with lemon markings; 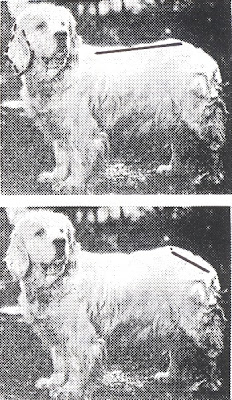 Let us return for a moment to Auckwear Ripper who Margaret Reed described as the best she ever had. As I said before Auckwear Ripper was the sire of *Maureen Maeve from TEIGNWORTHY DAWN,from a second litter of this mating, also whelped in 1936, was the studbook bitch GLORY O�SHEA. GLORY O�SHEA was the dam of Dick Cape�s last big winner 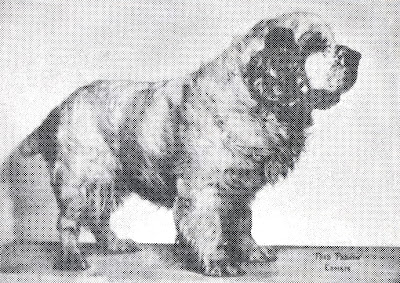 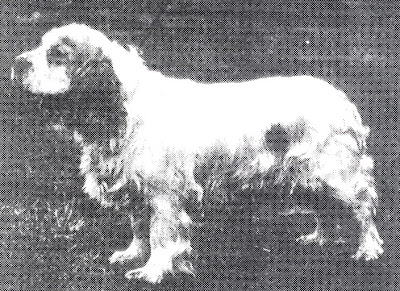 Thornville Slip (photo from Dog’s Life 1965)has definitely left her mark on all modern Clumbers through her progeny. With finer bone than *Dainty of Breda, she also had 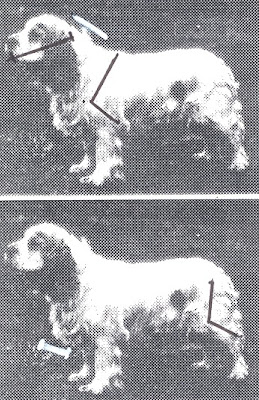 a longer and plainer head;
deeper and heavier markings;
she had a good reach of neck;
fair fore and hindquarter angulations;
superb chest width and development;
she claimed several CCs and produced numerous winners. 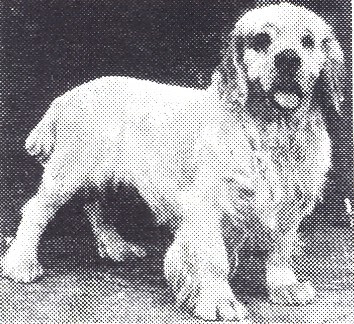 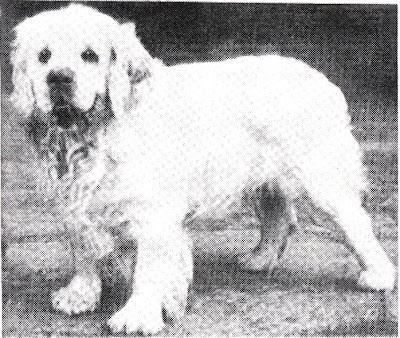 Is it that good type will �out� every five generations – I think not. There is more to breeding than just luck. In all these examples it has been a case of avoiding close breeding until there is no apparent kinship between two mates for say four generations. Breeding these two well performed dogs together to produce the fifth generation and bringing into play the �magical� links – the common ancestors, to yield the best again. History shows, unequivocally, that breeding depends more on the quality of the ancestors in the third to fifth generation and the merging of these quality genes by mating two appropriate dogs together. Champion to champion can produce good stock, Ch Hempsted Shotover to Ch Fielding Beauty to yield Royalist of Wilts for example, a well performed show dog, a fair sire, an excellent grandsire!

One other important lesson can be gleamed from this study without further research and that is that the average generation length is 3.8 (to Thornville Sindy via Thornville Slip) or 3.6 years (to Thornville Sindy via Dainty of Breda). You may breed something nice from a young dog or bitch, but the ones that will have the lasting effect on the history of the breed are those born when the parents are three to four years of age! 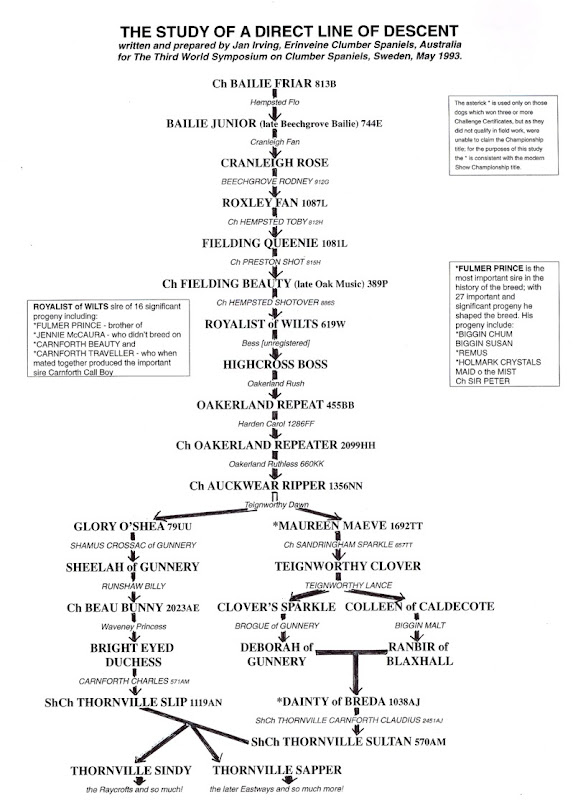 Farrow�s THE CLUMBER SPANIEL 1912
various issues THE KENNEL GAZETTE
various issues THE STOCK-KEEPER
Hutchinson�s DOG ENCYCLOPEDIA 1940s
Hubbard�s DOGS IN BRITAIN
Phillips & Cane�s THE SPORTING SPANIEL various editions
Cassell�s THE NEW BOOK OF THE DOG
THOMAS FALL photographer
THE KENNEL CLUB STUDBOOKS
Ghent THE CLUMBER SPANIEL, THE ARISTOCRAT OF GUNDOGS in Dog�s Life 1965
Ghent MARGARET REED
DOG WORLD ANNUALS
OUR DOGS CHRISTMAS NUMBERS
personal communication Mrs BW Russell, Eastway
Grayson & Furness� THE CLUMBER SPANIEL 1991
Croxton Smith�s EVERYMAN�S BOOK OF THE DOG
Fitzgerald�s THE BOOK OF THE DOG
and many other anecdotal references
A couple of the photographs have been changed from the video, but essentially this paper is presented as the video was.