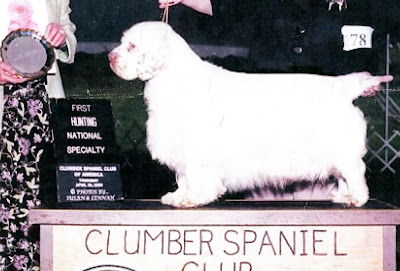 �At last year�s National, Emma won the Hunting bitch class and an Award of Merit, passed obedience and rally.

�She was also the girl we wrote about hunting and being near a bear.

�This year, 2010, Emma competed in the Hunt Test at the Senior level, and passed all the land work, but did not see the bird in the water, so would not go in. It was so dark, and rainy, windy, cold, just nasty. She competed in Novice B obedience, and passed, she was 2nd in her Veteran Sweeps class, and won her Veteran Regular class.

�She has been quite the girl, competing first at the Clumber National at just over 6 months old, and has competed many other years always doing well. She was once again one of three bitches from the entire show that was asked to be at the Judges Seminar and Hands On.
�I am working with her, competition obedience classes, in advanced obedience, retrieving, jumping over two types of jumps, all off leash. With luck she will compete at the Open level, the middle level of obedience classes.

We even hope to to the Canadian National with her in mid July, but it is a 8 or 9 hour drive.�=