The White Spaniel is the story of the evolution of the breed we know  today as the Clumber Spaniel. The author takes readers from 5000BC through the art and literature of the eons to the establishment of shows, the stud book, and the modern Clumber. Along this extensive highway, she examines numerous records, myths, fallacies, and hard core fact.

The White Spaniel is most generously illustrated, and written in a free flowing style but still the sources are noted and relevant authors and artists credited. The early section, in particular, is supported by complementary information in side panels; while the later part which studies individual dogs is lavishly illustrated and supported by a huge database, results from major Clumber events, and registration statistics.

The culmination of fifteen years work, this book is bound to find its way into the hearts and minds of true Clumber lovers and the most famous of libraries.

Jan Irving is the part owner of the Erinveine Clumbers which was established in 1958 by her father the late David Irving. Erinveine  have bred over seventy champions, with representatives across Australia, New Zealand, in Japan, Canada, America (and Hawaii), Finland, Belgium, the UK, and Sweden. They have also produced several all breeds Championship Best in Show winners since the early 1960s.

Jan is the author of Clumber Spaniels published by Hoflin, USA and editor of the international magazine Clumbers (formerly Clumber Spaniel Correspondence) (now retired). Past editor of the Australian all breeds magazine Top Dog Journal, she is also the author of Dog Games and The Cashmere Book, and children’s novel The Secret of the Dragon, and reference book First Aid for Dogs. 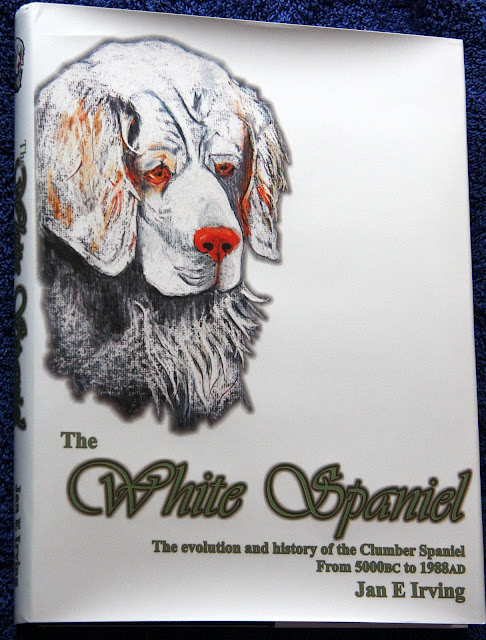 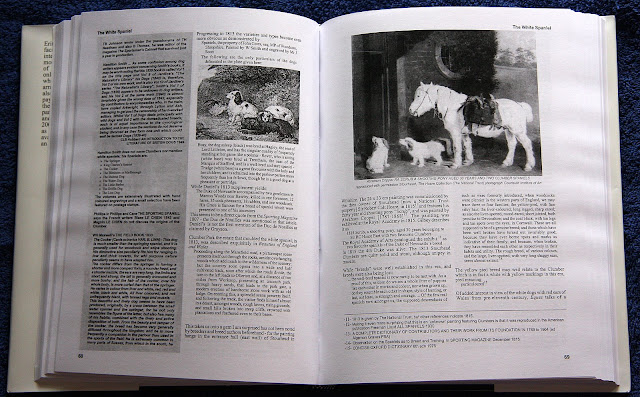 There are hundreds of people I should thank, amongst the many who are alive today and were kind enough to respond to my enquiries, and also the many, many who have passed before us and had the infinite good sense to publish their feelings or actual illustrations of Clumbers. My list below, will undoubtedly (and unintentionally!) fail to list some of great importance to this work, for which I humbly apologize. The White Spaniel has been worked on for 15 years and I am the first to admit not all acknowledgments have been duly or safely noted.
In this section, I would particularly like to thank
• Anita Roberts, Tioga, UK
• Bill Ironside, Belcrum, UK
• My family, in particular my mother Barbara Irving
• University of Nottingham, Manuscripts Department
• José Luis Martinez Correas
• Valerie Allenden, pedigree researcher, UK
• Elizabeth Daven, cuttings specialist, UK
• State Library of Victoria, particularly Dominique Williams
• Victorian Canine Association Library (in particular Faye Murphy & Heather Simpson)
• The Kennel Club Library
• British Museum
• British Library
• Sheffield City Art Galleries
• Bibliotheque Nationale France
• Anne Moon, Deanway, UK
• Anne Winchester, USA
• Jim Stockill, Tanelorns, Canada
• Michael Gilham, Topjoys, UK
• Western Australia State Library
• New South Wales State Library
• Mrs Darling of Berwick Library
• Judy Hiller, Drumhill, USA
• Helene Gration, Baiyai Irish Setters, Australia & Peter James, Kennel Club
• John Fletcher MBE, UK
• Nick Waters, UK
• American Kennel Club Library
• The late Rae Furness, Raycroft, UK; Lesley Orr, Leybel, New Zealand; Brian Wood, Oakring, UK;
Robbie Carnegie, Bowhouse, Australia; Colin and Irene Butler, Avcott, UK; David Hancock, UK;
Leslie Connell, Cameo, UK;
and John Bell, Australia who has so inspired me with my breeding
programme and fascination with the history of the breed.
• The various Clumber clubs that have published “snippets” from the past and also recorded the contemporary successes in newsletters and specialpublications
• Many, many more acknowledgments appear throughout the text
• And Scott Samuel who pulled all the electronic data from the old computer allowing these last 100 copies to be published! 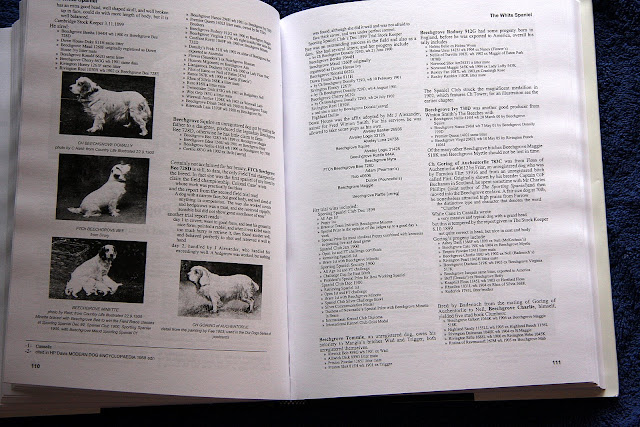 Spaniels are very much a British creation. The French have their epagneuls and the Germans their wachtelhund but real spaniel work as such is peculiar to the British sporting scene.
This work and this scene was greatly enriched by the development of the White Spaniel, the Clumber, a distinctive and highly individual breed. Most British gundog breeds have been patronized by the aristocracy and the Clumber Spaniel is no exception. From this background, the admirable Clumber has attracted loyal fanciers in a wide range of countries. For these fanciers this breed has become something very special in their lives, and understandably so.
In her booklet on the breed, The Clumbers of Clumber Park, Margaret Aldred has captured this affection …it is impossible not to fall under their charm. After over 30 years of being owned by Clumbers I am still under their spell. They are cheerful dogs and bear no resentment when corrected — but then of course a Clumber knows when he is superior.
In his Dog Breaking of 1909, General Hutchinson pays tribute to the breed’s sporting skill I once shot over a team of Clumber spaniels … the team kept within twenty or twenty-five yards of the keeper … He rather surprised me by saying that his spaniels, from working quietly and ranging close (therefore alarming the birds less), procured him far more shots in turnips than his pointers.
It has been both satisfying and informative for me to read through this book of Jan Irving’s on the Clumber Spaniel. Satisfying because I find most books on breeds of dogs published these days extremely disappointing, mainly because they lack scholarship and real research. Informative because this book is a remarkable feat of breed research, an archive to serve the breed for all time. So many breeds lack such a provision; sadly far too many so-called breed histories recount the same old myths about dogs swimming ashore from ships, immediately being so prized that they are mated with every local dog to create the new breed. With the publication of this book the breed of Clumber Spaniel is better served than most breeds.
As an outsider but as an admirer of the breed, my plea to future Clumber Spaniel breeders is a simple but heartfelt one. Please breed the Clumber as a sporting spaniel; it doesn’t matter if you do not work your dogs, but it matters if your dogs do not have the physical capability to work. For me, a Clumber Spaniel without the anatomy which would permit it to work in the shooting field is no longer a member of that great sporting breed. Jan Irving has set out almost exhaustively the heritage of this distinguished breed. If the Clumber becomes too heavy or its eyes too beset with haw to cope with field conditions, then that is a betrayal of all the work done by the pioneers listed here. The Clumber is not owned by the current generation; you are merely safeguarding the breed for the future. Respect your breed’s heritage, it’s all here.
David Hancock MBE FIMgt FTS MILAM
Oxfordshire, England
April 2000
(David Hancock is the author of six books on dogs including The Heritage of the Dog; his seventh book is due out in 2000)

This title is limited to an absolute print run of 200 only copies – ever!