When the American Kennel Club was founded in 1884, only nine breeds were recognized: four Spaniels (Cocker, Clumber, Sussex, Irish Water Spaniel), three Setters (Irish, English, Gordon), the Pointer and the Chesapeake Bay Retriever. (Those were the simple, good old days!). Thus undisputedly the Clumber is one of the nine oldest breeds recognized in the US.

The actual beginnings of our breed, however, are and probably will always remain shrouded in mystery. There are no less than ten theories about the Clumber�s origin. The most outlandish, and the most romantic, is that a French Duc de Noailles sent his whole kennel of these unique heavy, white spaniels over from France to his good friend the second Duke of Newcastle in England to shield them from the 1789 French Revolution. This is the theory found most often in old books, but totally discredited today. The facts, dates, etc. all prove this to be totally false. In fact, the Australian author of the veritable encyclopedia of the Clumber, Jan Irving, goes so far as to call this �bizarre nonsense.� A well-respected English judge and spaniel expert who in 1912 published the first whole book on Clumbers, James Farrow, theorizes that Clumbers were developed using the old, much larger sporting Cavalier King Charles Spaniel. Another theory circulated about sees the Clumber as being developed from the Basset, but the Clumber�s hunting mute, his colour and markings, hair texture, nose colored shades of brown, and head, among other factors, contradict this.

What we do know for certain is that the earliest irrefutable evidence of the Clumber Spaniel is contained in a large 1788 oil painting by Francis Wheatley (1747-1801) titled �Return from Shooting.� It depicts the Second Duke of Newcastle (1720-94), his head gamekeeper, William Mansell, and others, with four unmistakable Clumbers � certainly smaller, but ones you would not be embarrassed to take into a show ring today. The first mention in print of our breed is in an April 1807 illustrated article in the �Sporting Magazine� which relates that William Mansell had been breeding this type of flushing spaniel for some 30 years. What original breeding stock used we will never know, there being no written records. Long before the first organized dog shows, on many large estates the aim was simply to produce a useful hunting dog suited to the terrain of that area. Clumber Park, consisting of 3,800 acres, had much dense undergrowth. With certainty we can affirm that the Clumber Spaniel owes its name to this one private estate. Breeds are often named for countries, large areas, or cities, but to the best of my knowledge only the Clumber and the Sealyham owe their names to simply one very precise piece of personal property. Clumber Park is in Nottinghamshire, England, set in Sherwood Forest of Robin Hood fame. Clumber House was often described as the most luxurious private dwelling in England, but thanks to the ruinous British taxation system, had to be demolished in 1938, and is today a large public park belonging to the Crown.

This particular estate was in a section called the Dukeries, because of the immediate presence of five large estates belonging to English dukes. In a period of very limited pastimes, hunting played a large part in the life of the landed gentry, and for this the dogs were an important factor. Much experimental breeding was conducted by the gamekeepers. The Second Duke of Newcastle�s head gamekeeper, William Mansell (1746-1806), was particularly successful in developing a flushing spaniel well adapted to the terrain, and specimens were given or sold to the neighboring dukes. Thus from the very start the spaniel from Clumber Park remained in a very few selective hands. Little by little they began to reach others outside the dukeries, probably sold surreptitiously by gamekeepers. The next hard evidence we have is an 1834 painting of Lord Middleton surrounded by his ten Clumbers, and another in 1835 of Colonel George Foljambe on his estate with his Clumbers. In 1840 Queen Victoria writes in her diary about going out to see her husband Albert�s �seven fine Clumber Spaniels� such dear, nice dogs.�

Finally in 1859 began the first organized dog shows, and Clumbers were exhibited by the Earl Spencer (ancestor of Princess Diana). Dog shows have been the salvation of our breed. They began to be seen more and more by others rather than simply by a small aristocratic group of landed gentry.

Already in 1842, however, the first Clumbers had been imported by a British officer, Lieutenant (later Major) Venables, stationed in Halifax, Nova Scotia. Gradually the breed came to be bred in Canada, chiefly in Ottawa. When the Westminster shows began, it was chiefly Canadians, especially one F.H.F. Mercer, who came down to the US to exhibit Clumbers.

And so Clumbers finally came slowly to be known on five continents. Three generations of English royalty (Prince Albert, his son King Edward VII, and his son King George V) bred Clumbers, a strong factor in the breed�s renown in England. Some 40 Clumber fanciers founded the first Clumber Spaniel Club, in England in 1904. In the US there were years of few or no registrations, but beginning in 1931 the DuPonts established a large Clumber kennel on their Delaware estate with imported English stock. Their Clumbers were exhibited and the breed became better known here, though very rarely did the DuPonts share any of their Clumbers.

It was really not until the mid 1960s that Clumbers began to be known on a larger scale in the US, chiefly in four kennels in New York, Ohio, New Mexico and California. In 1972 Eunice Gies began the Clumber Spaniel Club of America with only seven founding members, but which today has grown to over 500. 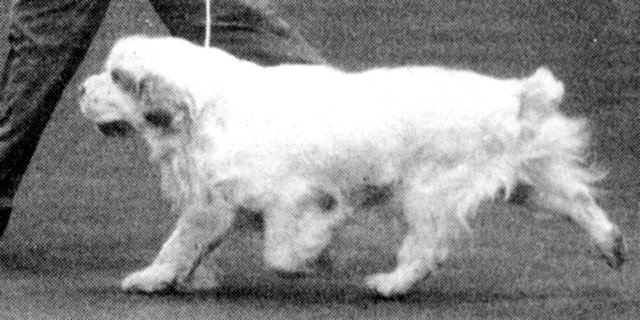 went BIS at Westminster, seen by millions on TV. So it can be safely said the Clumber Spaniel is here to stay.

This article first appeared in “Show Sight” magazine in the USA, which focuses on two or three breeds for each issue and this last one was on Clumbers. They came out this past July (2011) and were also picked up for republication by the Canadian Clumber Club’s “Clumber Crier”.