“CLUMBERS” the international magazine
USA: Award for Versatitlity
for competition at the Clumber Spaniel Club of America’s National Specialty and related events
first awarded in 1989

owners please note even if you didn’t submit an article at the time, you are welcome to send one now 🙂 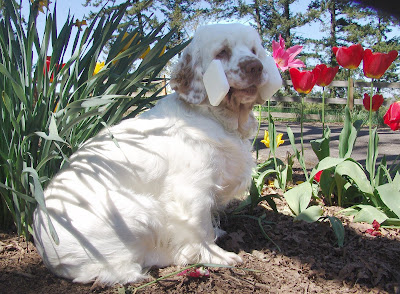 Versatility with Beauty = Maggie!
Janice Scott
Am. CH Jet Set�s Margarita CDX RE winner of the 2006 CSCA Clumber National Specialty �Clumbers� Award for Versatility
This special bitch, named Maggie, came into my life as a nine week old puppy. She was bred by Robert and Jane
Bonnaccorso, long time breeders of Clumber Spaniels. She was the product of frozen semen from a dog, CH
Companionways Clipper, who had died many years ago.
I soon discovered what a dynamic, smart, quality puppy she was. By the time Maggie was ten months old, she completed her American Championship in two weekends by winning four majors including a Best of Breed over four specials. But her great talent showed in the obedience ring. At eighteen months of age, she won High in Trial at the 2006 CSCA Clumber Specialty from the Novice Class and completed her CDtitle. She also won the Rally Excellent class and competed in the Best of Breed class. Five months later she completed the CDX obedience title. At the 2007 Clumber Specialty she won the High Combined Award, which is the first time a
Clumber has ever won this award at a CSCA National Specialty. To win this award, she had to qualify in the
obedience classes, Open B and Utility.
Maggie, who is only two and a half years old, will continue to compete in obedience for many more years. Plans are that she will also earn Tracking and Agility titles in addition to the Utility obedience title. Maggie is a very enthusiastic worker who learns fast. I consider myself so very lucky to have known and loved such a wonderful companion and friend. =

Scarlett�s energy and joy for living have
helped her through the six titles she has
earned:
� Champion
� Rally Novice
� Novice Agility Jumper
� Tracking Dog
� Junior Hunter
� Senior Hunter
We are hoping she passes her ability to her
puppies!
Cindy Brizes